The Vagabond Update is here! 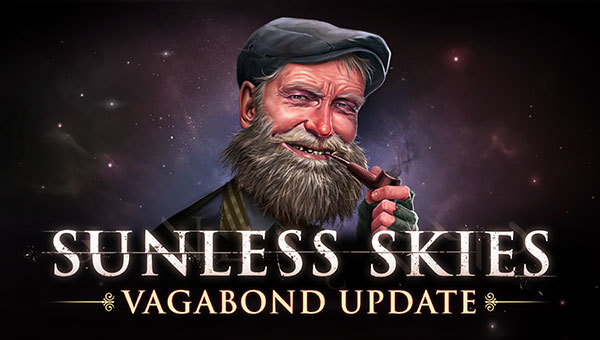 The Vagabond update for Sunless Skies has been released! The following additions and improvements await your captains:

Offer a commission to this gentleman of the skies (and no fixed abode), who will take you to the abandoned quarters of the sky. Experience a tale of fortunes lost, found, and lost again. Meet the ‘skylarks': the community of ragged wanderers who rove the heavens, and help them find the way to the Sugarspun Garden – a place surely too good to be true…

Meet the Amiable Vagabond at Polmear and Plenty’s, or sometimes in London. He’s partial to a sky-story or two.

Wonders of the Skies and St Anthony’s Lighthouse

Bold explorers will discover that several existing spectacles now have stories attached to them:

In addition, a brand new spectacle has been added to the skies! Skyfarers in search of respite may stop at St Anthony’s Lighthouse, a gothic addition to the mists near Worlebury.

The Winchester War is hotting up. Upon visiting London, skyfarers will witness the inauguration of a new class of locomotive in the service of Her Majesty – a development that the Tacketies are unlikely to allow to go unanswered. Meanwhile, in the depths of the Reach, a fungal menace is stirring.

Three new agents with unique challenges, behaviours, and stories will begin to appear in response to your explorations. We’ve designed these to add more interest, variety and challenge to encounters in the mid-game, when the player is sometimes revisiting previously explored locations in the Reach – we hope you enjoy them!

In order to reward captains who have invested in assaying equipment, two new types of discovery have been sprinkled across the heavens: Celestial Ruins and Windswept Habitations.

Each has its own stories, and can host a variety of encounters. Excavate treasures from crumbling ruins that predate humanity! In Albion, seek refuge and plunder in long-abandoned homes and factories. Perhaps you’ll even encounter a band of skylarks squatting there, eager to swap stories!

Other fixes and improvements

We’re in the middle of this year’s #loveindies campaign! This is a community celebration of indie games. Reviews mean so much to indie teams. If you have time to poke about in your Steam library and leave a couple of reviews for indie games you’ve enjoyed, you’ll be making someone’s day! (If one of them were Sunless Skies, it’d be ours.)

We still have more improvements planned for Sunless Skies! Now Vagabond is out, we’ll be shifting our focus to other areas of the game, including character progression, game balance, a range of quality of life improvements and journey times.

To keep hearing about development and updates, you can follow us on Steam or on Twitter. You can also talk to other skyfarers on the Failbetter Games Discord.